ONCE AROUND THE SUN WITH THE CALANDA WOLVES

A web-documentary by Peter A. Dettling  © 2018 all rights reserved


In 2012 an extraordinary event took place when six wolf pups were born in a hidden den located high on a mountain overlooking Chur, the capital of the Swiss Canton Graubünden. The birth of these wild wolves at the Calanda was the first in Switzerland in over 150 years. Up to that remarkable year only lone wolves occasionally found their way into the Swiss Alps after they had been extirpated in the late 19thcentury. In 2013, I decided to return from Canada to Switzerland, the country of my birth, to document this unfolding story. In a way it was a continuation of my personal Swiss wolf journey that started in the mid-1990s when I painted a watercolour painting depicting a lone wolf that finds his way back onto Swiss soil. Fiction became reality in 1995 when the first wild canid was confirmed to have arrived in the Swiss Alps from neighbouring Italy. Eleven years later I got eye to eye with one such lone wolf and was able to capture one of the very first photographs of a wild wolf in the Swiss Alps. The 2012 news of the first wolf family triggered a desire to pick up my personal Swiss wolf trail once more. After 16 months of field work (spread out over three-and-a-half years), I had enough material to create this one-year web-documentary miniseries divided into 52 episodes.

A young wolf uses a forestry road to move more less effortlessly through the area. As soon as he noticed the photographer he disappeared into the forest. (This frame was pulled from a video file).

The Calanda-wolf-mother F07 brings back a solid piece of meat to her young, which are about 6 ½ weeks old and waiting at a rendez-vous spot near the Calanda Mountain (in the vicinity of Chur, Graubünden-Switzerland) for the return of the adults from their hunt. Those are among the very first pictures ever recorded of a wolf family rearing young wolf pups in the Swiss Alps. The Calanda wolves, as they became known, are the first confirmed wolf family (in 2012) of modern times after they had been shot, poisoned, trapped and killed to extinction in Switzerland at the end of the 19th century. The recolonization of the Swiss Alps begun in the mid 1990ies with lone wolves entering the country from the expanding Italian wolf population.

I chose to launch ONCE AROUND THE SUN WITH THE CALANDA WOLVES on March 3, 2018. March 3rd is officially known as the “World Wildlife Day”, a day to raise awareness and celebrate the flora and fauna of our planet. There is no better day to start this series. Furthermore, I decided to extend the “Wildlife Day” to a “Week of the Wolves”. This means that starting March 3rd at least one video per day will be aired until March 10. After that the episodes will be published – as promoted – once per week. The web-series has a total of 52 episodes. Each episode is between 1 ½ to 7 minutes long. Similar to a puzzle, each episode will add a specific angle to the story. 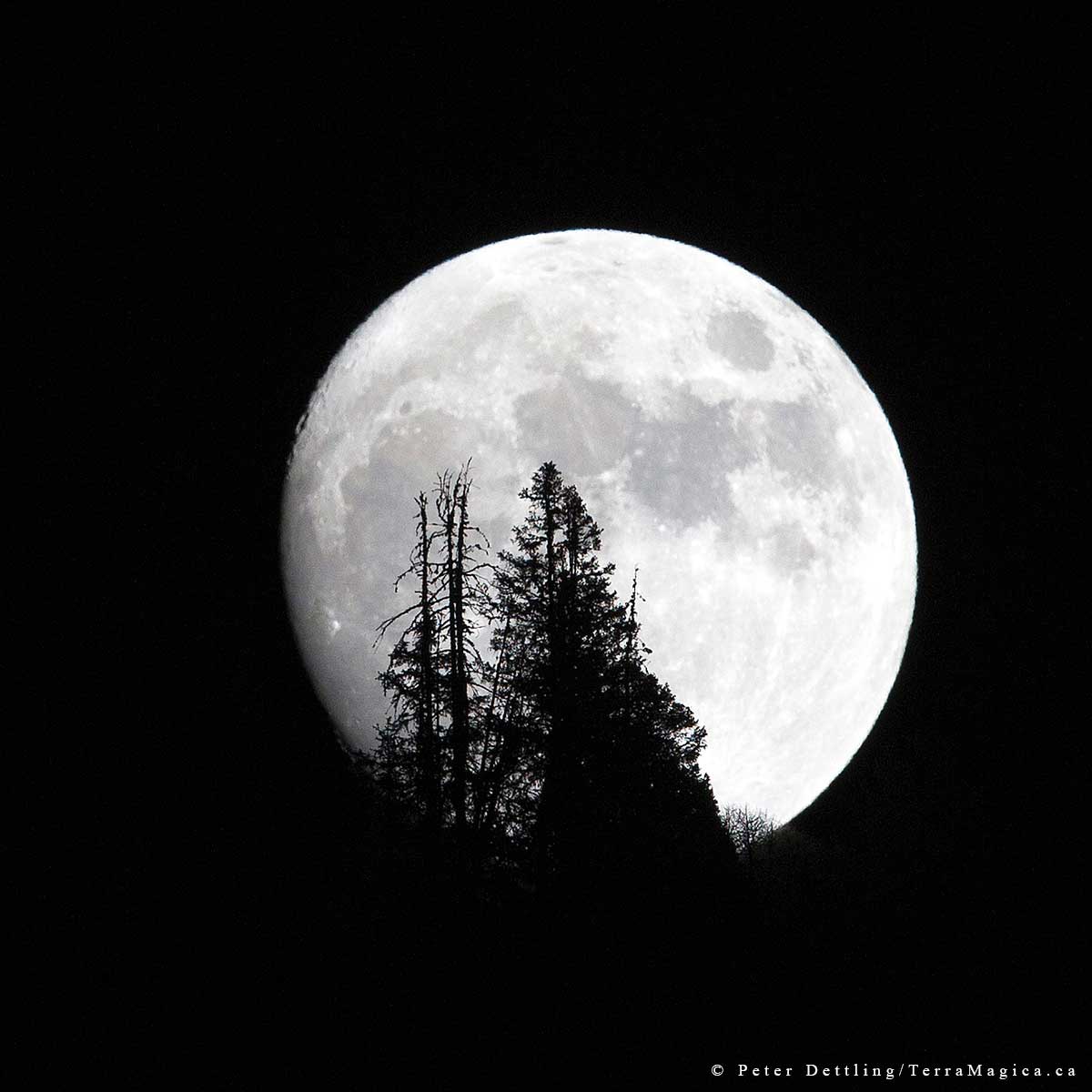 A full moon rises over the Calanda Mountain. This three peaked mountain is located adjacent to the city of Chur, Switzerland.

Wolfswood. Since the end of 2011 this dense forest located on the steep flanks of the Calanda Mountain builds the core area of the Calanda wolf pack - the first wolf family to establish itself in over 150 years on Swiss soil.

A red fox track (between the thumb and the index finger of the photographer) in comparison with the larger tracks of the Calanda wolves.

The goal was to create a complex, thought provoking and visually stunning miniseries that not only gives an in-depth look at the world of the Swiss wolves but that also shows the rhythms and patterns of the natural world itself. It was also important to portray how one of the wealthiest nations on earth is coping with the return of Canis lupus, the great hunter.

The 2880m high Piz Fess as seen from the Calanda Mountain at dusk.

View of the Calanda from the Bonaduzer Alp with the capital of Graubuenden,Switzerland - Chur - on the upper, far right corner.

The mixed forests of the Calanda shine in their best light and colour in the fall.

A herd of sheep are enjoying the (too) mild mid-November days outdoors while the last sunrays of the day light up the Calanda mountain near Chur, Switzerland.

A Maremma Sheepdog takes a well deserved break while protecting the sheep from attacks of wolves or stray dogs.

Shepherd Astrid and her three border collie dogs are taking a break in pouring rain after the sheep drive up to Ramozaalp (located on the border between the canon of St. Gallen and Graubünden, Switzerland). The Alp is situated in the territory of the Calanda wolves. The Calanda wolf family is the first confirmed wolf family of modern times (2012) after they had been pushed to extinction in Switzerland at the end of the 19th century. In the first two years after the arrival of wolves there had been a few losses to the wolves. The Alp owners subsequently hired a full time sheep herder along with sheep guardian dogs and haven’t lost since a single sheep to the wolves, which are still living in the area.

A group of red deer stags retreat at dawn to higher grounds after having spent the night in the lush alpine meadows located in lower elevations.

A red fox spots the photographer while hunting in an alpine mountain meadow near Kunkelspass, Graubünden in the Swiss Alps.

Spring crocus are among the first flowers to bloom in spring in the Alpine regions of the Swiss Alps.

A young chamois follows his mother on the Calanda Mountain after a fresh, early winter snow fall.

Left: The sheep farmer Lieni Schneller keeps a small herd of sheep in the core territory of the Calanda wolf family. He protects his sheep with an electric fence agains the wolves and has thus far (2017) not lost a single sheep to the wolves. Right: Former game warden Georg Sutter inspects what little is left of a chamois killed by the Calanda wolves.

VIEW TRAILER HERE..
For more information on this Swiss Wolf Saga or to view the trailer or a 52 image portfolio go to www.PeterDettling.com (available in English & German)….

SIGN UP HERE.. For only 26$ (50 cents per episode) you can view one episode per week for an entire year and follow how wolves are trying to repopulate the Swiss Alps.

“ Peter Dettling takes the best damn pics of the other creatures of anyone I know on our planet. They are windows through the barriers we have built between ourselves and the others. Through Peter’s windows we experience the heart, guts and soul of these, our fellow beings, and cannot but realize that they and we are of one blood. And that they deserve – must have – our sympathy and understanding if they are to survive the witless ruin we are making of their land and ours.”

Of Wolves & Men: Over several years of intense field experiences, Dettling obtained a good understanding of wolf behaviour in the wild and the issues surrounding human-wolf co-existence. Starting in 2005, but especially between 2007 and 2011, he intensely documented the hidden lives of wolves in the wilds of Banff National park in Canada partnering with renowned German wolf ethologist Günther Bloch. Dettling expanded his field observation knowledge in Jasper National Park (Canada), Yellowstone National Park (USA) and Graubünden (Switzerland) resulting in a total of four wolf-related books (either as the main or co-author), including the highly acclaimed Will of the Land.  Between 2013 and 2017, Dettling focused his time and energy on documenting the first wolf family to establish itself in the Swiss Alps in over 150 years in the Calanda mountain region near the city of Chur.

Peter A. Dettling is a multiple award-winning professional nature photographer and author specializing in documenting authentic wild animal behaviour and conservation issues. His images are regularly published in various print outlets, magazines and exhibitions across North America and Europe. Dettling has also been portrayed multiple times on TV and is in particular known for his work on wild living wolves.